Founded in October 1893 by a group of ex-pupils of Monkton House School, the Wanderers were originally known as Old Monktonians, but in 1913 it was decided to change the name to Glamorgan Wanderers Rugby Football Club. The name change was deemed necessary as the club’s membership had widened somewhat since its formation.

The Wanderers grew into their new name well, utilizing seven different grounds to host home matches until the club arrived at its present home in 1952, having played at Sophia Gardens, Tydraw Road, Penylan, Bishop’s Field, Llandaff, and several locations in Whitchurch and Llandaff North. In fact the Three Elms pub, still on Whitchurch Common, was used as the club headquarters for more than thirty years, with older club members relishing the salubrious facilities, including for the first time, a hot bath after a match.

The present ground in St Fagan’s Court was purchased by raising money via various appeals post World War II. Thus ‘The Memorial Ground’, dedicated to all those players who lost their lives in the two World Wars. The Wanderers Club in Cardiff’s Wyndham Arcade became a famous watering hole from 1923 and many business deals were clinched in the dining room, whilst the snooker room saw many a tense battle and many famous names including Wales’ greatest ever boxer Jimmy Wilde who graced the green baize. This was one of the first such clubs to be formed in Wales and its unique atmosphere attracted rugby aficionados from all walks of life, and on international days from all over the world! Its closure in 1969 is still mourned by many inside and outside the club.

At one time the Wanderers were known as the finest losers in Welsh Rugby because of the type of game they played: six teams took the field every Saturday. Although the playing history up to 1960 was not outstanding they nevertheless produced some notable results including a 6-6 draw with Maesteg during the latter’s invincible season of 1949-50. The club became less of a soft touch in the 1970’s as the fixture list developed impressively.

The 1980’s, however, saw the club come of age culminating with a runners-up slot in the Welsh unofficial Club Championship and Whitbread merit table. Success in the Schweppes WRU cup competition was also achieved, reaching the quarter finals in 1985, together with a string of successes in sevens competitions, losing the Snelling Sevens in 1985, but winning in 1986. The sevens tradition continues to this day including this seasons victory in the Gareth Edwards sevens.<br/>

In 1987 the Wanderers had the honour of playing, and defeating, two international sides; the touring American Eagles and a Portuguese XV, on their home ground in Lisbon, during that year’s club tour. The 1988/9 season was based around an extended cup run which saw the Wanderers reaching the quarter finals only to lose to the eventual winners Neath.

The Wanderers were one of the inaugural sides in the premiership league in 1990 but the initial years of leagues proved hard work as the club slipped in status. The slide was stopped fourteen years ago and a revival began under the chairmanship of Blair Evans culminating in successive league titles and promotion from Division three into Division 1 in 1999/2000 under the captaincy of Garan Treharne. A successful tour to Boston in 2000 saw the Wanderers bring home the Tullamore Dew cup. 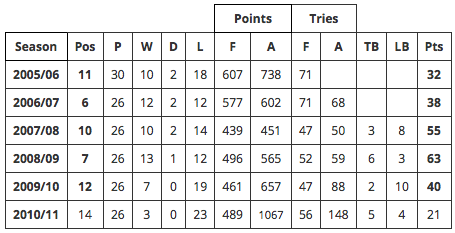 After a balanced start to the 2009 / 10 season, the Wanderers beat neighbors Cardiff RFC in a thrilling Boxing Day spectacle at The Arms Parks.  This was to be a turning point though as the Wanderers then failed to win another league game all season – although they did secure two cup victories over Neath RFC and Rumney RFC before narrowly losing to Carmarthen Quins in the quarter final.

The 2010 / 11 season was to begin as the previous season had ended – with the Wanderers still in the search for that elusive league victory.  It was to be a long hard season but the Wanderers continued to play with great spirit and enthusiasm – unleashing a host of talented youngsters onto the pitch.  With just three league victories under their belt the Wanderers found themselves in the play offs with Ebbw Vale and Bridgend Ravens.  The play off draw saw the Wanderers having to play Ebbw Vale in the semi final at the Arms Park.  A 16 – 13 victory set up a final clash with Bridgend Ravens which took place the following week, also at the Arms Park. Wanderers were to lose this match 19 – 38, bringing to an end their run in the Premiership.

For the 2011 / 12 season the Wanderers will play their rugby in the SWALEC Division 1 East League under the captaincy of local boy Lee Highgate. Lee is a product of the very successful junior and youth set up at the Wanderers and captained the Youth team in 2004.

In addition to the 1st XV the club currently runs a Development side who play in the WRU Second XV League, a Youth XV who play in the RAF Careers BA League and junior sides at all age groups from under 8s to under 16s.  As League and Cup Champions the Wanderers Youth were the best Youth side in Wales in the 2010 / 11 season – the only Youth side to retain the cup.